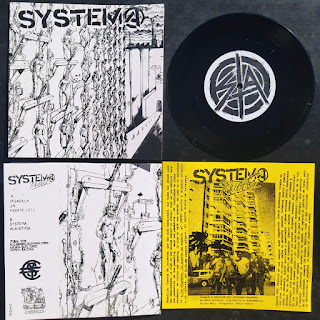 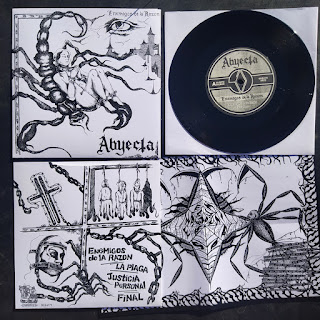 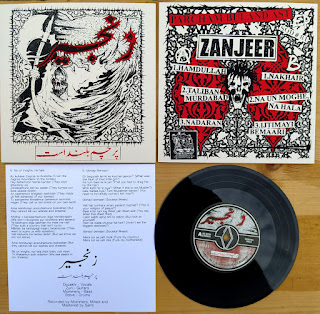 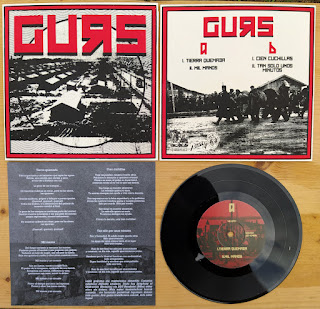 Posted by Missing the point at 14:19 No comments: 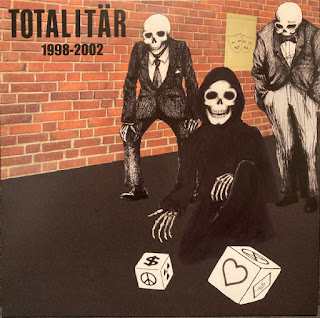 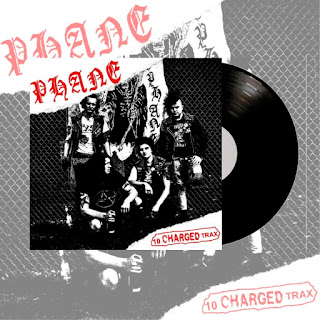 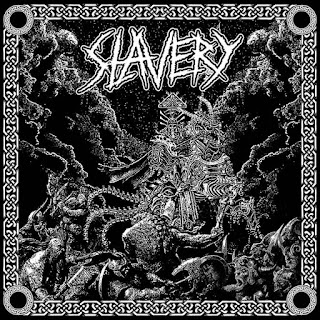 Posted by Missing the point at 11:05 No comments: 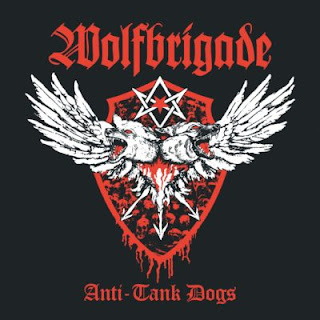 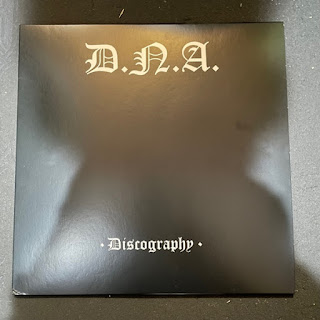 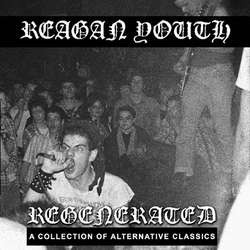 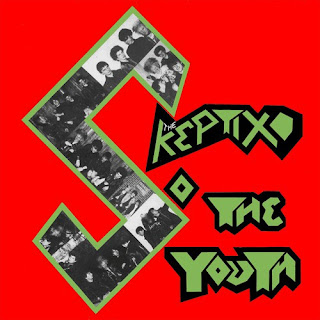 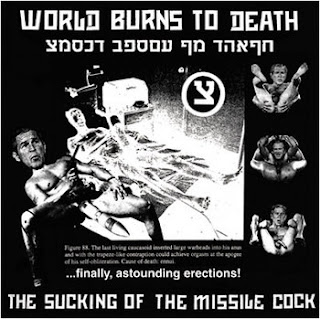 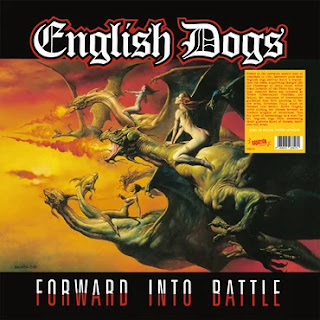 Posted by Missing the point at 08:42 No comments:

SOLD OUT - Sludge "What is the real cause of this Tragedy ?" EP - From the quiet city of Wakayama, Sludge strikes back with 4 new tracks of their style of Japanese hardcore. They fuse the heavy riffing and guitar acrobatics of metal, the dynamic songwriting and rebellious attitude of hardcore, and the fuckin stench of crust into a sound that's all their own, emotional and spirited but also tough and heavy. Throw later Ghoul and later AntiSect into a blender and sprinkle Hi-san's guitar heroics and Katsuya's memorable roar on the top, and you're in the right territory. Powerhouse shit, mastered for vinyl by Enormous Door Mastering for maximum impact. £6.00 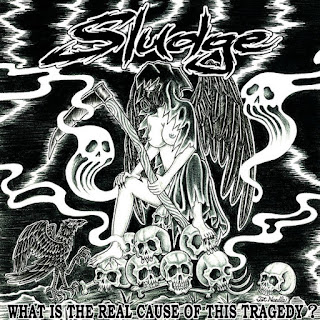 Agravio - Que Futuro De La Verga EP (SPHC​-​117)(Mexico)From the ashes of Sacrificio arises Agravio. Seeking "to show that crude daily life of our so-called third world, that imprison and embitter us", Agravio follows up their demo tape with 7 tracks of hardcore rampage. Compared to Sacrificio, it's a little less complex and thrashing, a little more loose and hardcore, but the same sense of desperate attitude and immediate, relentless whirlwind songwriting. Originally the goal was to do some heavy touring on this record, but given corona, they've been doing some heavy rehearsing instead. So watch out for an LP soon! 500 copies in 1 pressing
£6.00 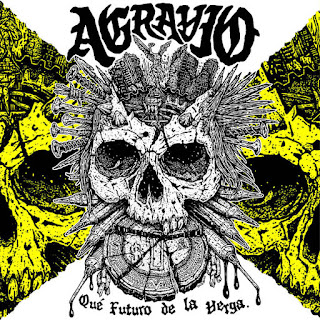 SOLD OUT - Detesto - self-titled EP
(SPHC-118)
(Brazil)
After a split live tape and a few comp tracks, Detesto make their long-awaited vinyl debut. Five tracks of heavy d-beat hardcore, clearly drawing from brutal Swedish kang like Wolfpack, Disfear, the Uncurbed, but with a modern sense of reverb'd vocals and the occasional mosh groove. All captured with a flawless production: guitars at in-the-red metallic distortion, bass at a cataclysmic distorted rumble, drums heavy and dense, vocals in the desperate reverb'd hell. Perfect! And the Sugi cover art is the cherry on top. For me, it's one of the best releases of this style in recent years. £6.00 plus post
Detesto - self-titled EP (SPHC-118) | SPHC Records (bandcamp.com) 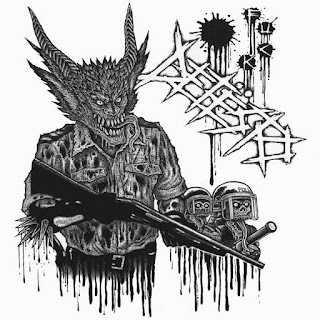 Posted by Missing the point at 07:24 No comments:

Second instalment of this compilation series, featuring hardcore punk bands from the Southwest of England who play at the DLH funday event in Bristol. Also included are some tracks donated from American hardcore legends Bad Religion and JFA. Yellow vinyl! 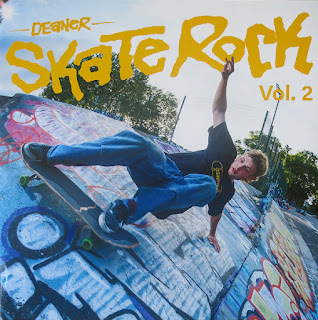 Posted by Missing the point at 06:05 No comments:

SOLD OUT - AFK "Another Pair Of Eyes" LP

The third album of Hamburg's steamroller noise punk merchants A.F.K. (Aargh Fuck Kill) - Nine new songs that, compare to their last album, see a u-turn back to their roots of full throttle hardcore punk with a aggressive sonic intensity!

Lyrics shouted in German and English show and tell a description of the insanity, frustration and anger that lies in the void of the current state of society. Especially in the past two years.

One can say that A.F.K. along with their mates from INSTINCT OF SURVIVAL are the pinnacle of the current Hamburg crust punk exports!

Recorded by Ryan Leverenz-Mompellio at OFF YA TREE Studios.
Mastered by Will Killingsworth at DEAD AIR. 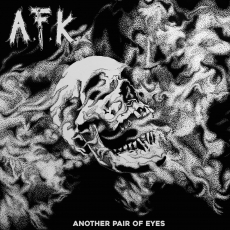 SOLD OUT - HIATUS "From Resignation" LP

"... to Revolt!" - The 1993 debut full-length of Belgium's crust punk institution HIATUS! Originally released by the legendary Sound Pollution Records of Hellnation's Ken Hansford. The original release was a quite hard to find item for decades, until now twenty-nine years after its initial release and 12 months at the pressing plant we present you the official reissue of this Euro-Crustpunk classic.

Packed with 16 tracks of fast, raw and powerful scandi-crust infused hardcore punk with incredible force behind it's production. The sound of HIATUS was massively influenced by the likes of DOOM and ANTI-CIMEX but with a dash of hardrock-esque mid-tempo lines thrown in here and there to lay the foundation that will become the unmistakable unique HIATUS style.

The range of lyrical topics is shockingly still too relevant even three decades later. Poverty, Police Violence, Fascism, Sexists, Warmonger, Drug abuse, Animal rights, Sell outs... like nothing has changed at all!

Includes a double sided lyric sheet and a bonus poster. All artwork has been restored as close to the original as possible.

Limited Color edition on Beer Bottle Green Vinyl is available exclusively from Ruin Nation Records as pre-order and from HIATUS at Gigs. 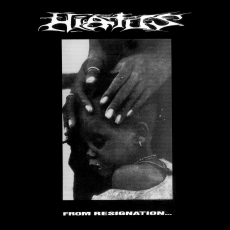 Posted by Missing the point at 11:19 No comments:

New stuff from F.O.A.D In Soon

Posted by Missing the point at 10:16 No comments: